Skip to content
I started my YOUNG SCIENTISTS course again this term. I’m trying to get primary children thinking and working scientifically!
Last year, when I presented this course for the first time, all the children had plenty of fun but I had to re-think what I was doing after the first few classes. This year’s course has loads of new activities plus some old favourites like making slime. It is still my hope that in carrying out all the activities the children will start to understand about what the scientific method means. 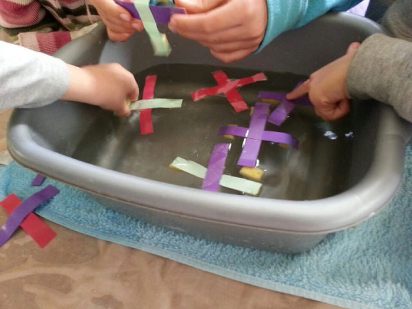 The photos above are from last year’s course.

This term, we started by discussing the questions “What is science?“”What do scientists look like?” and “What do scientists do?” The children sorted some cards with pictures of real scientists and other famous figures. They also drew a picture of a (stereo)typical scientist on my  whiteboard. The aim of this was to show them that scientists do not conform to the stereotypes and that anyone can be a scientist.

We used my mystery boxes (based on the instructions on the Understanding Science website) but I didn’t spend very much time on this. I’ve done this activity with some of the children already and it is a great activity but I probably should have cut it out from this class to allow more time for the measuring activity which followed.

I was trying to get the children to appreciate the value of quantitative observations. I had provided three activities that required the children to take averages. I asked them to find the mass of one M&M (without precise scales), the thickness of one piece of paper and the time for one heartbeat. I’m not sure that many of the children understood what they were meant to do. I instructed a few children on how to take their pulse, and I set a minute timer on my phone but not all children did this, and one child still insisted that his heartbeat was once every 2 seconds, without measuring it.

In the second class I talked a little about last week’s activity and then introduced the idea of testable and non-testable questions. In order to investigate a question scientifically, we must first of all pose it as a question. Simply saying “I am interested in the water absorption properties of nappies (diapers)” doesn’t provide a question that can be tested. Instead you could say “Do certain types of nappies absorb more water than others?” Then you can turn it into a testable question by choosing several named brands and setting up an experiment where a measured volume of water is poured onto them and you measure how much is not absorbed.

The activity for this week was making slime, but doing so in a quantitative way. There are instructions all over the internet for this. I used the instructions from the Science Buddies site because it is set up more like an experiment than just a sensory activity. In this experiment you compare the slime produced with different ratios of glue solution to borax solution. We discussed the safety aspects of using borax and all children decided to wear safety glasses when doing the activity. I wanted the children to fill out an investigation sheet including their hypothesis and predictions, but again this meant that the time for actually making the slime was limited. I’ll try to learn from this and allow more time for the activities in later classes.
I provided the investigation sheet because towards the end of the course the children will carry out their own investigation and present it to the rest of the class. This will probably be done in pairs or groups. I want them to get used to the planning part of scientific investigations and not just carrying out the investigation.
Here’s a brief outline of the next few weeks:
Class 3: Variables. Another hands on activity (investigating the foam produced by dishwashing liquid). Planning an experiment to do next week.
Class 4: Carrying out the experiments planned in Class 3. Recording the results and drawing conclusions.
Class 5: Analysing results and sharing results (communication and collaboration between scientists). I will show a poster of a scientific experiment so they see one way that scientists share their work with others. Start to plan the experiments they will carry out and present to the group.
Class 6: Carry out the experiments they planned in Class 5. Record results. Discuss and decide if they want to change anything.
Class 7: Final experiments – repeating or changing what they did last week. Starting to prepare their talks or posters for the last week. (The rest of the preparation will need to be done at home.)
Class 8: Final talks/posters, presenting their investigations to the rest of the group.