In our third class this term I handed out mirrors, magnifying glasses and spoons and asked each child to say what happened to light when it reached the object. I briefly talked about concave and convex mirrors and how lenses work, but I mostly wanted the children to talk about whether light went through the object or was reflected by it. I did a demonstration using a bouncy ball to show reflection, refraction and transmission. In the Friday group I asked the children to take turns doing the reflection bounces, which I think was better than just watching me do it.

In the Monday group we then went upstairs to do an experiment from Dr How’s Science Wows. It was meant to show why the sky is blue. The children enjoyed the experience of huddling in a dark cupboard, adding milk powder to the water, winding up our torches and shining them into the glass vase. But I didn’t think it worked very well! Our cupboard was not very dark, and also the torches I used had LED bulbs which were rather blue instead of the more yellow spectrum emitted by traditional torches. If I did this again I think I would bring along blackout material and a different torch.

So for the Friday group I used a different tack. We talked about how light can be transmitted, reflected, refracted, absorbed or emitted by objects and then I initiated a rather more active game. I split the children into two groups, one to be beams of light at first, and the other to be particles in the object. The light group took turns running towards the object (at the centre of the netball court) and I shouted out an instruction like REFLECT or TRANSMIT and the beams behaved accordingly. When everyone had had several tries, we swapped groups. I hope it helped the children to think about what happens when light hits an object. I especially liked the ‘RE-EMIT’ instruction as all the ‘object’ group got a chance to turn into light rays and run in all directions.

(For people concerned about my grasp of the science, I am fully aware that the particles in an object do not convert themselves into photons like that, but I just wanted to show that light was emitted in all directions regardless of the incident beam.)

Both groups then got a chance to try the ThinkFun Laser Maze game. This is a game where you have various optical components, one low power red laser and several puzzles where you have to arrange the components in the right positions so that the light shines on one or more specified targets. One of the aspects of this game that I love is the use of semi-transparent mirrors, so that the beam is split into two. The children enjoyed this game although everyone wanted to be the one to solve the puzzle, so they needed plenty of supervision to make sure that everyone had a go and no one child dominated. 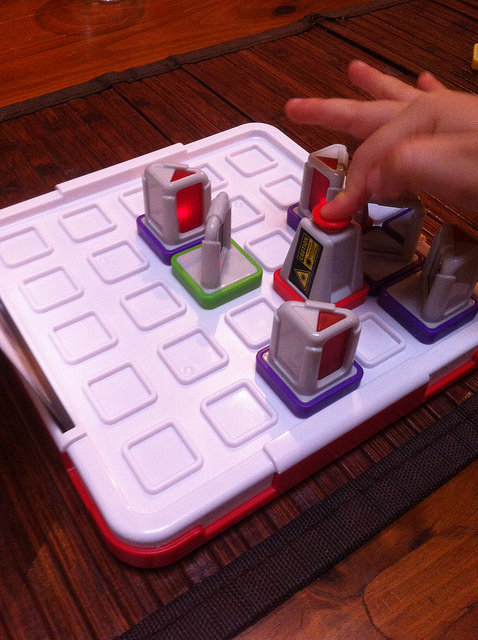 One of the parents has discovered the Laser Logic 3D app (iTunes or Google Play) for smart phones which works a lot like the Laser Maze game. Have a go and see if you like it.

In the fourth class all the children gave short talks that they had prepared on the subject of light. We have a range of personalities and some children are very anxious about talking in front of a group, even a small one, but everyone stood up and said something. I loved hearing all the scientific facts that they had learned and we even had a demonstration of refraction from one girl. I was bursting with pride in all the students and I hope they felt proud of themselves.

We then made pinhole cameras with Pringles cans and the children pointed them around the field (but NOT directly at the sun) and looked at the images on their little ‘screens’. This was a very successful activity. Try it with your children!

See below for many resources on this topic. Let me know if they are helpful, and if you have others to add to the list.

Sounds Amazing, a resource for GCSE Physics (exams taken in the UK, usually at around 16 years old).

Octobass on The Kid Should See This

Multilayered mechanized music making – using old vinyl records on a turntable and many other electronic and mechanical items.Again from The Kid Should See This.

Video of an opera singer and beat boxer under MRI scanner http://www.youtube.com/watch?amp;v=HhRn7E1LaLs

Voice change in boys on kidshealth.org: here and here.

Largely text-based explanation from NASA on missionscience.nasa.gov , or here (Flash)

These activities on amazingspace.org are slightly more interactive but still require reading . There is a lesson plan here.

Why is the sky blue? (We didn’t cover this in our first two classes but touched on it in the third class.)

Reflection and refraction: A Rube Goldberg machine on The Kid Should See This.