You probably know that you can tell the time by looking at how shadows change over the course of a day, but did you know that you must not buy a sundial while on holiday?

The length of shadow, and the angles the shadow makes, vary over the course of a day as the sun’s position changes relative to Earth. That is the basis of using sundials to work out the time of day. But the shadow also changes at the same time of day for locations at different latitude. Therefore a sundial bought on holiday in Spain, for example, will not work if you take it back to the USA or even the UK.

Incidentally, way back in about 240 BC Erastothenes not only proved the Earth was round, but estimated the Earth’s circumference based on the different lengths of shadows at two different places on Earth and at the same time.

If the above 8 min video is too long for you, check out the 57 second Physics Animation instead:

This all goes to explain why the night before our first class, I was up late drawing gnomons for each child to make their own sundial. The gnomon angle – the angle it makes with the horizontal – has to be the same as the latitude of the place where you will be using the sundial. Here in Sydney our latitude is 33.86 degrees South. I used this angle to calculate the hour lines, based on the formula here. 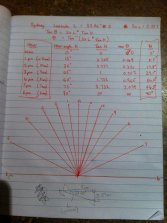 To position the sundial correctly you need to line it up using a compass. I had a line pointing to the North. In the northern hemisphere you would line up that part of your sundial to point South.

The children made their sundials and took them out into our garden to see if they ‘worked’. Of course, the sundial was an hour out, compared to our clocks, because of daylight savings.

I often find it hard to decide how much of the class to prepare myself and how much to leave for children to make their own discoveries. I had planned the sundial activity to quite an extent, because I didn’t want the children to spend the whole hour trying to work out the angles themselves and therefore going home with nothing. I wonder now if I should have left the lines un-labelled. Then the children could have used the time outside to (a) work out in what direction the shadows will move as the day goes on and (b) write the ‘right’ hours onto their sundials, showing where the shadows fall in the summer time.

In the older group I also talked a bit about the electromagnetic spectrum, how the energy in each beam of light (or strictly speaking, each photon) is inversely related to the wavelength and we ordered different types of electromagnetic waves (UV, visible, infra-red, X-rays, radio waves) according to wavelength.

I mentioned black-body radiation and how the peak of the spectrum relates to the surface temperature of the ‘black-body’. Images to illustrate all of these would have been good and I will try to prepare these for when I repeat the class.

We talked about how the sun is mainly made up of hydrogen and helium . Nuclear fusion reactions make helium out of the hydrogen and also release energy due to the difference in mass between a helium nucleus and two hydrogen nuclei. You can calculate the energy released using Einstein’s famous equation E=mc2.

I also, very briefly, mentioned the surface of the sun and how it is not a uniform colour but instead shows ‘granulation‘.

Just as an aside, it was an Australian scientist, Ronald Bracewell, who invented an instrument to study the microwave radiation coming from the sun and therefore to get temperature maps of the surface of the sun. This is called a microwave spectroheliograph. You can find his original research paper on the internet but I have not found much else explaining how it works in everyday language.

The sundial activity was based on one in the Universe in a Box activity book, which is available to download free in many different languages. Be aware that the sundial in their pdf document is designed to be used in Germany and will be completely wrong for anywhere in the Southern hemisphere. There are some more sundial instructions here from Queensland University of Technology (pdf), here from astronomerswithoutborders.org, and here on skyandtelescope.com

To create your own sundial you need to know your latitude. Then calculate at what angle the shadows will be falling. I used this website for my calculations  http://solar.physics.montana.edu/cgi-bin/advanlesson_S.cgi

If you are interested to learn about why the sundial doesn’t give the same time as our clocks, try this link.

Another activity that looks good from the Universe in a Box is 3.6 Solar Surface, where you simulate the Sun’s surface by boiling herbs in a saucepan.

You could also try 3.7 Observing Sunspots, but I would caution that you should only do this with children who are very sensible and understand the dangers of looking directly at the sun. To do this activity you need some kind of solar viewer. There are many on the internet which are all similar to a pinhole camera. You need a long distance between the pinhole and the ‘screen’ to get a reasonable sized image for observing sunspots. A 1 m distance will give an image about 9 cm wide.

Visual/auditory learners would probably enjoy watching astronomy documentaries or DVDs. Way back in 1997 or thereabouts, I watched the Solarmax film at the Science Museum IMAX and it is now available on DVD. Watch the Solarmax trailer here. Although Rotten Tomatoes only gave it 57% I thought it was very good and a quick search on astronomy forums shows I’m not the only one. There’s an educational guide based on the Solarmax film, produced for the Cook Planetarium and available to download as a pdf here.

Auditory learners may like to listen to songs about the sun and the solar system, like this one:

Reading/writing: Try your local library to see if you have any books about the sun or telling the time. Children at pre-school level up to about Year 1, there is a beautiful picture book by Geraldine McCaughrean called ‘My Grandmother’s Clock‘, which also covers seasons and other things you can observe that show the passing of time.

There’s a good summary of a lot of the information about light and the electromagnetic spectrum here from the UNSW. It’s written for adults, not children.

If your child loves writing you could do a freewrite about the sun. In freewrites, the child gets to write for 15 minutes without worrying about spelling, punctuation or grammar. They just write what they are thinking about. The piece can be left as it is, or used on another day to expand upon, edit and publish as a finished piece of writing. Red Glasses Learning has a free Powerpoint presentation on Teachers Pay Teachers about the Earth, Sun and Moon with writing prompts.

Try a google search for lapbooks or writing prompts about the sun or the solar system.

Try Enchanted Learning for more activities on the sun, aimed at children in years K-3.

Kinaesthetic: Children may like to do a ‘walk through the solar system‘. If they are mathematically inclined they could even work out the scale themselves and how far they would have to walk. Note that you might want to scale the walk down a bit. When we did the walk as it is given in the link above our pre-schoolers got tired well before Neptune. It might be better to make the planets on a different scale to the distances between them.

There are some permanent solar system scale models all around the world. We came across the Coonabarabran Solar System Drive when we were on holiday in 2013. There might be one near you.