This week my younger group (covering the KS1 syllabus) made home-made instruments. This is what our craft table looked like after the activity: 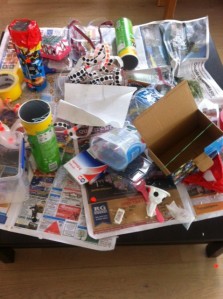 We started off with a recap about sound, given that most of the children hadn’t taken part in last term’s class. One girl played her violin for us and my 10 year old son demonstrated his doumbek (a middle-Eastern drum). He pointed out to the other children that the sound was far better if you angle the drum so air can move out of the base. All the children had a turn on the doumbek if they wanted to.

I told the children that all sound is caused by vibrations. We tried plucking a rubber band, and I stretched it two different ways to show that the same band stretched longer makes a higher note. I got out the copper pipes for my glockenspiel and we had a go at hitting them. To get a good resonance you have to suspend the pipe where the nodes are. (Nodes are stationary points in a wave, i.e. they do not move up or down.)

We briefly talked about the vibration making the air molecules move and then reaching our ears. I also said that the amplitude of the vibration determines how loud or quiet the sound is. However, the amplitude comment was mostly directed at one of the mums so I am not sure whether any of the children absorbed this information.

I then got out my box of ‘junk’ and showed the children the rainstick I had made by knocking nails into a Pringles tube and adding some popcorn kernels. All the children had loads of fun hitting nails into their tubes (wearing suitable safety gear of course). I ran out of popcorn and so I had to give them rice as well.

This is a picture of the inside of my rainstick, with the nails making a spiral pattern. 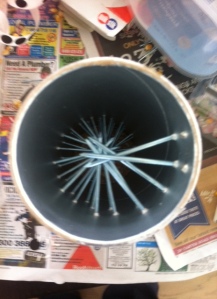 Some children made other ‘instruments’ with the materials I had provided. However, I think once I brought out my rainsticks, all of them wanted to use the nails, so the instruments weren’t as diverse as I had hoped.

If repeating this class, I would organise it differently. I think I would start off with the box of junk, provide a larger number of materials and a wider range of materials, and challenge the children to find different ways of making a noise with the same object. This could lead into a discussion about how we make music (striking, blowing, scraping, shaking). I would leave the rest of the class far more open and see what instruments the children came up with.

I might not introduce my rainsticks until half-way through so that it was just one option for making an instrument and the children didn’t feel they had to follow my lead. Or perhaps I shouldn’t show them my instrument at all. If we did make rainsticks, I would provide several different types of filling, some small like rice and some much larger, like shells. Then the children could see whether the type of filling made a difference, and decide which kind they wanted to use.

When I am further ahead with my copper-pipe glockenspiel it would be good to get the children to organise the pipes in order of pitch. This would make it absolutely obvious that pitch is related to the length of the pipe (and we can extend to other instruments too).

I also forgot about two activities I had planned – one to get the children to do a kind of ‘mexican wave’ to illustrate vibrations, the other was a small discussion about our larynxes (voice boxes).

Nevertheless, I feel happy with this class as I think all the children enjoyed themselves and learned something – whether about the nature of sound or the skill involved in hammering in nails! I know for certain that one child went home and subsequently experimented with rice and other household items all over the place, and my 3 year old (who sits in on the classes) had plenty of fun decorating herself with sticky circles (which I had provided for decorating the rainsticks).

The older group (covering the KS2 syllabus) this week consisted simply of my 10 yo son mentioned above. But we finally got the chance to make our own soda-can stoves. We went outside to fill them with methylated spirits and try to light them. 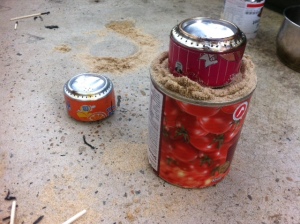 These stoves are really easy to make and use everyday materials. Nevertheless we identified two main problems with actually using them: the wind blows them out pretty quickly; and you need something to balance a pot on if you actually want to use them to heat up any food. But my son was so keyed up by just making the stove that he vowed to find the next few days addressing the other design problems. I think this will cover some of the ‘Working Technologically’ side of the syllabus as well! 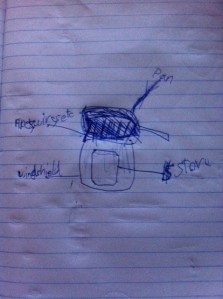 My two middle sons also had fun making a mini-camp-fire with the spent matches: 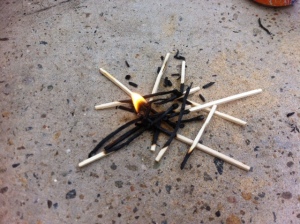 I found the rainstick activity on the Satisfied Mind website.

I am following the instructions on instructables.com to make my copper pipe glockenspiel but there are other instructions all around the internet.

The soda can stove instructions were also on instructables.com.